PiggyBac (PB) transposition, a mobile genetic element system, efficiently transposes between vectors and chromosomes by a "cut and paste" mechanism, which has been used for genetic manipulation in animal models as well as cell lines. Based on the powerful PB transposition system, Creative Biolabs is very honored to provide a full range of gene engineering services to help you with the research of immunotherapy, gene therapy, and regenerative medicine.

PB transposon was originally identified from the genome of the cabbage looper moth, Trichoplusia ni, in the 1980s. Because of its high activity after being introduced into mammalian genomes, it has become an efficient gene transfer tool in genetic engineering research. PB transposon system is composed of three elements, a transposable element, a transposase, and a gene of interest. PB transposase can recognize inverted terminal repeat sequences (ITRs) located on both ends of the transposon vector. It efficiently integrates the genes of interest between the two ITRs in the PB vector into target genomes. PB is initially used for gene delivery tool in insects. Recently, studies have reported that PB has the highest transposition rates and cargo capacities in mammalian and cell lines as well as mouse germline cells. 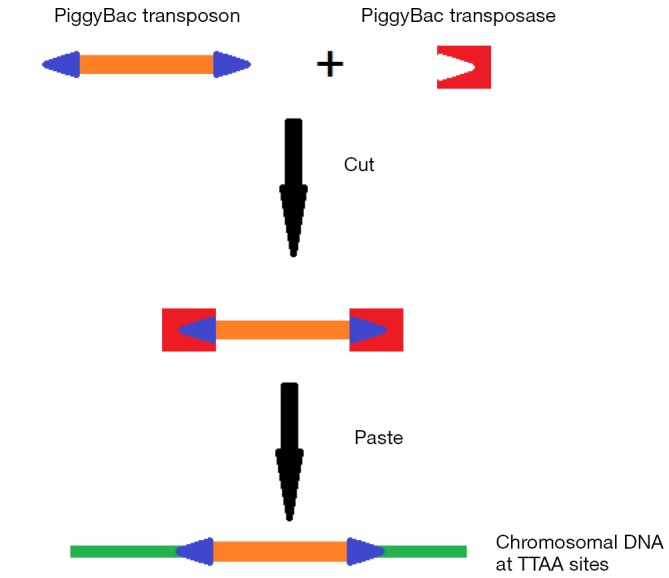 As a better tool for genetic screening, PB has several unique advantages, such as a weak tendency of local jumping and no undesirable footprint mutation left after transposition. Potential oncogene or tumor suppress genes can be inserted into mice genome through the PB transposon system, which is used to reveal the function of genes in the cancer-causing mechanism. Furthermore, PB is also applied for genome-wide mutagenesis.

PB transposition system provides an efficient gene delivery tool for introducing genetic information into eukaryotic genomes. Compared to Sleeping Beauty, Tol2, and Mos1, PB is a flexible and highly active transposon in mammalian cells. Compared to common viral vectors, PB is relatively safe and large cargo. PB has been reported as the most promising transposon-based vector system for achieving site-specific therapeutic gene targeting due to the flexibility of its transposase.