As an industrial leader in mRNA delivery, Creative Biolabs is proud to offer a series of mRNA delivery services.

Span 85 is a non-ionic sorbitan trioleate where OH groups in the molecule are esterified forming tri-esters. 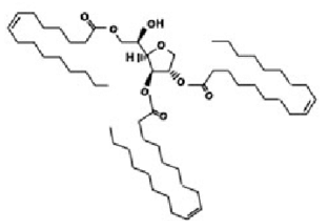 The drug releases pattern is the most important characteristic of drug delivery systems. In the past decade, much attention has been focused on vesicular systems that are emerging as safe delivery vehicles to reduce the adverse effects. Niosomes are non-ionic surfactant vesicles that exhibit several characteristics, for example, the niosomes are more chemically stable, easier to store, safer to handle. Vesicles containing span 85 can be prepared by a two-step emulsification method. Span 85 can be assembled to form a highly steady niosome, the niosome has been proved to have a hydrotrope-solubilization effect on both hydrophobic and hydrophilic drugs.

The drug vesicles are distinguished by their shape and size, drug entrapment efficiency, and release rate in vitro. Some studies showed that effective drug compartmentalisation occurred in the lymphatic system after intraperitoneal administration of niosome-encapsulated rifampicin. Thus rifampicin encapsulated in niosomes can be utilized for the treatment of tuberculosis along with the lymphatic system. Niosomes have been widely used for improving the stability of the entrapped drug. The reversed micellar solution prepared by span 85 alone with Cibacron Blue F3G-A as an affinity ligand showed expecting potential for application in reversed micellar protein extraction operations. The application of the reversed micellar systems for bioseparation has gained considerable attention. In addition, the “micro-waterpool” of the reversed micellar inner core can act as a carrier for drugs and bioproducts.

For many years, nano-emulsions have been receiving increased attention due to their importance in a variety of technological applications. It is known that the nano-emulsions mainly depend on the oil-to-water ratio and the surfactant type and other additives. Nano-emulsions were prepared using the spontaneous emulsification mechanism which occurs when an organic phase and an aqueous phase are mixed. It was found that surfactant type and concentration will affect the emulsions' stability. Studies have shown that span 85 affects the formation of nano-emulsions.

Span 85 plays a play a vital role in scientific research. Creative Biolabs is committed to providing the most satisfactory service in mRNA delivery to help our customers to achieve each specific research goal. Please contact us for more information and a detailed quote.