A distinctive feature found in eukaryotic mRNA is the presence of a cap structure at the 5' terminus, which is an important modification and specifically interacts with numerous cellular proteins to involve in pre-mRNA splicing, RNA export, translation initiation and RNA turnover. With access to advanced instruments, fit-for-purpose laboratories, and professional knowledge, Creative Biolabs offers a comprehensive range of mRNA services, including but not limited to mRNA synthesis, modification, delivery, stability test, and mRNA-based cell reprogramming. Amongst, mRNA 5' fluorescent cap is an available and delicate service item in our mRNA modification portfolio.

Almost all eukaryotic mRNAs have a cap at the 5' terminus, which is a unique residue composed of a 7-methylguanosine moiety connected to the mRNA via a triphosphate linkage, m7GpppGpNp(Np)n. This specific methylated modification plays important roles in all stages of mRNA metabolism: synthesis, splicing, nucleocytosolic transport, intracellular localization, translation, and turnover.

Synthetic analogs of the mRNA cap have been proven to be valuable tools in the study of cap-associated processes without interfering with their biological functions, such as radioactive, fluorescent, and other spectroscopic labels. Fluorescence is a potent technique to obtain visualized information about the behavior and distribution of molecules within biological systems, usually aided by the fluorescence microscopy or Förster resonance energy transfer (FRET). Fluorescence mRNA also proves invaluable for mRNA dynamics, interactions and other biophysical studies. The most commonly used fluorophores in mRNA capping are low molecular weight groups that can not interfere with eIF4E binding interactions, such as anthraniloyl (Ant), N-methylanthraniloyl (Mant) and trinitrophenyl (TNP). These dyes are environmentally sensitive fluorophores that emit a stronger signal upon binding to a target mRNA. Nucleotides labeled with these tags can closely mimic naturally occurring nucleotides in their interactions with molecular targets.

Creative Biolabs offers a variety of strategies for the covalent linkage of fluorophores to RNA, mostly focusing on cotranscriptional or posttranscriptional enzymatic labeling approaches. 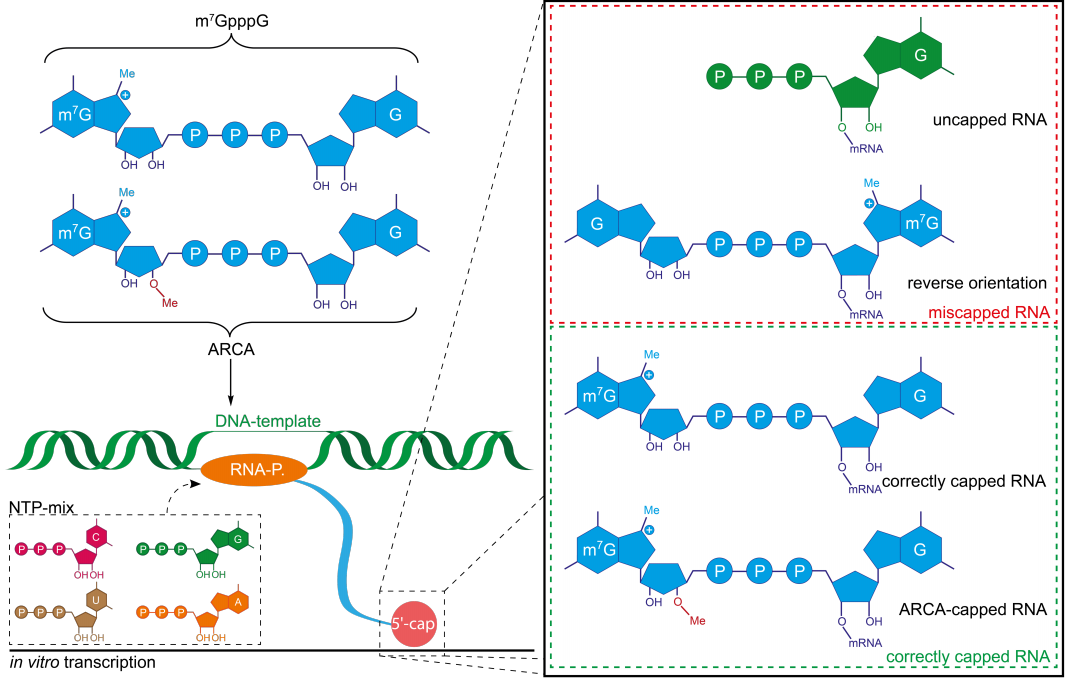 Creative Biolabs provides affordable custom mRNA services to help researchers tailor synthesis and introduce modifications to produce transcripts that are optimal for downstream applications. If you are interested in our services, please feel free to contact us.