Cancer neoantigens derived from random somatic mutations in tumor tissue represent an attractive type of target for the cancer vaccine. Vaccination against the tumor-specific neoantigens minimizes the potential induction of central and peripheral tolerance as well as the risk of autoimmunity. As a leader in pre-clinical vaccine development and production, Creative Biolabs is confident in offering the best development services for mRNA cancer vaccines. We combine the traditional as well as the advanced genetic engineering technologies to efficiently develop highly immunogenic mRNA vaccines addressing your urgent needs.

The most straightforward use of mRNA vaccines in oncologic settings is the immunization of patients with mRNA vaccines encoding tumor-associated antigens (TAAs). The second application of mRNA vaccines is the production of personalized vaccines against various cancers. Apart from being used directly to vaccinate patients, mRNAs can also be used in cellular therapies to transfect patient-derived cells in vitro and infuse the manipulated cells back into the patient. One such application is the transfection of patient-derived dendritic cells (DCs) with mRNAs encoding TAAs, which leads to the presentation of TAA-derived peptides on the DCs and activation of antigen-specific T cells in vivo. A second application is the transfection of patient-derived T cells with mRNAs encoding chimeric antigen receptors, which allows the T cells to directly recognize a specific antigen expressed on the tumor.

Cancer mRNA vaccines are designed to express TAAs that stimulate cell-mediated immune responses to clear or inhibit cancer cells. Once the target of choice is identified, the gene is sequenced, synthesized, and cloned into the DNA template plasmid. mRNA is transcribed in vitro, and the vaccine is delivered into the subject. Given its fully synthetic nature, any sequence could be designed in silico, synthesized, delivered as an mRNA vaccine, and tested rapidly in vivo in animal models.

Currently, two forms of mRNA vaccines have been developed: conventional mRNA encoding the antigen of interest flanked by 5' and 3' UTRs, and self-amplifying mRNA derived from the genome of positive-stranded RNA viruses. A conventional mRNA vaccine carries only the coding sequence of the antigen of interest flanked by regulatory regions. Modified nucleosides and sequence optimization are often used to ensure robust protein expression and immunogenicity. In addition to mRNA modification, increasing adjuvant properties in formulation might also be advantageous for vaccination. Self-amplifying mRNA vaccines are commonly based on the engineered RNA genome of positive-sense single-stranded RNA viruses. The mRNA mimics the replicative features of RNA viruses to increase the duration and magnitude of the expression, as well as subsequent immunogenicity of the encoded antigen. 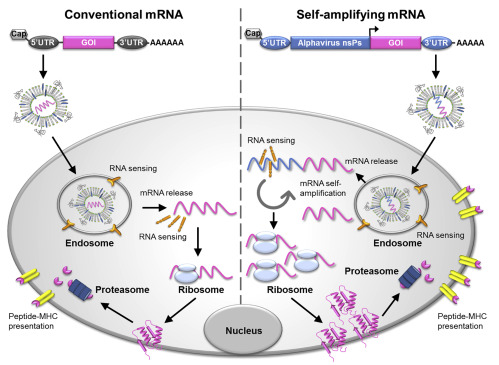 Modifications to the 5' m7G cap, poly(A) tail, 5' and 3' UTR, and nucleosides are fundamental to optimize the stability and translational efficiency of all in vitro transcription (IVT) mRNA for all RNA vaccines. Arrays of antigen sequences can also be designed and rapidly tested to generate vaccines with efficient leader sequences, optimal codon usage, enhanced neutralization capacity, or reduced undesired cross-reactivity.

The delivery route and formulation of mRNA vaccines are crucial to determine the kinetics and magnitude of antigen expression as well as the potency of the immune response. LNPs are a popular delivery vehicle for self-amplifying mRNA vaccines. Cell penetrating peptides (CPPs) represent promising tools for mRNA delivery into intracellular target sites. Protamine is an arginine-rich cationic peptide that can bind to mRNA and transport it into the cytoplasm.