The future of mRNA-based therapies relies on efficient and safe delivery technology. Creative Biolabs is one of the well-recognized experts who are professionals in the field of mRNA. Creative Biolabs now provides a series of reagents for mRNA delivery for our global customers, including but not limited to ionizable lipids, cationic liposomes, polymers, dendrimers, cell-penetrating peptide, protamine, nucleofection reagents, and self-assembling polyplex nanomicelle.

Ionizable lipidic systems are developed to reduce the toxicity while retaining the advantageous transfection characteristics. The mRNA is incorporated into the hydrophilic interior of the ionizable lipid. Specifically, the effective ionizable lipid's positive charge facilitates its electrostatic interaction, which aids in mRNA complexation and subsequent fusion with the negatively charged endosomal membrane for reduced toxicity post-injection. Furthermore, an ability for nanoparticles to ionize seems to be crucial to the endosomal escape process. Ideally, these novel ionizable lipids will allow for the safe and effective use of mRNA-based therapies in acute and chronic diseases.

Polymers have shown considerable potential in protein replacement, vaccine, and other applications related to mRNA therapeutics. In polymers, the negatively charged acid nucleic molecules could be easily attached by surface-absorption on cationic polymers and surfactants or entrapped in the hydrophilic core. Due to the facile preparation, tunable molecular weight, degradability, and diverse functionality, these functional polymers are suitable carriers for in vitro and in vivo delivery of mRNA therapeutics. Recently, polymers are utilized to stabilize the nanoformulations designed to enable mRNA delivery to lung epithelium via inhalation. 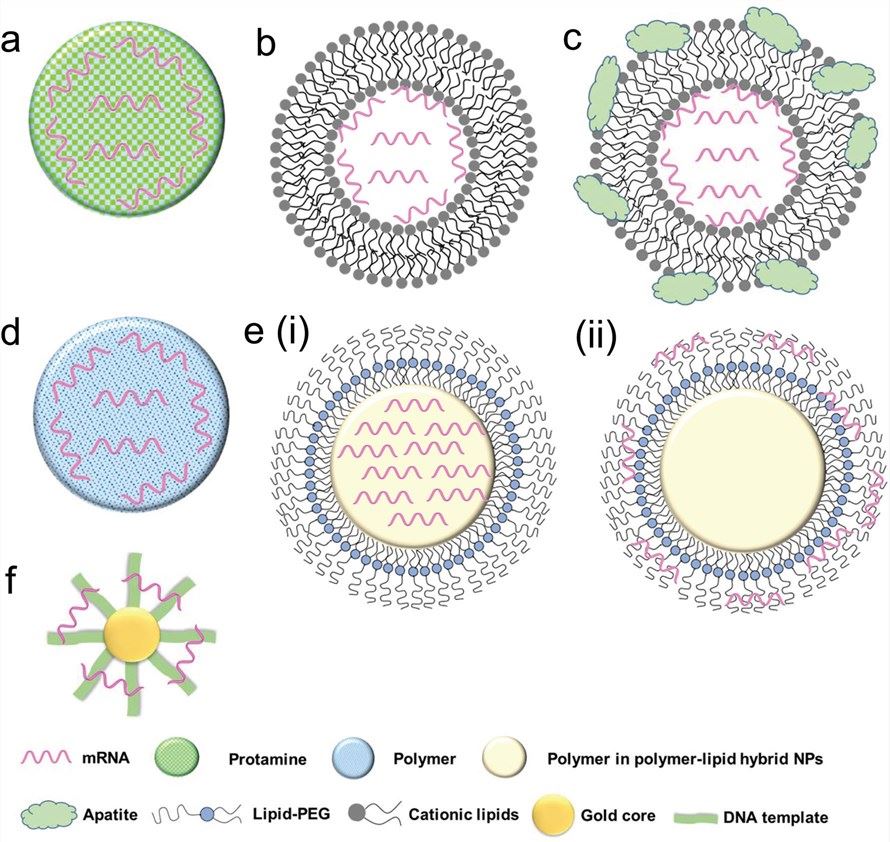 Dendrimers have been extensively studied for gene delivery. A dendrimer-based nanoparticle system has been developed to deliver antigen-encoding replicon mRNA, which is a type of self-amplifying mRNA. Dendrimers are as dendrimer-repeating units branch out in a tree-like shape and used to develop a single-dose, adjuvant-free, intramuscularly delivered, self-replicating mRNA vaccine platform. Biodegradable dendrimers may allow for increased usage of these materials.

Recent research has identified several small regions (9-16 amino acids) of proteins called CPP that confers the ability to traverse biological membranes efficiently. Novel CPP is developed, which quickly and efficiently enters living cells without the need for any other delivery reagent and possesses self-delivery, targeting, and reporting functions. Further, CPP-based delivery does not interfere with either specific targeting by or hybridization-induced fluorescence of the probes. This CPP approach can thus provide a powerful means for sensitive detection of gene expression in living cells and tissues in real-time, with high specificity and sensitivity.

Protamine is a natural cationic protein, which gives it an excellent ability to complex nucleic acid, including mRNA, and provides increased uptake of mRNA and transfection capabilities. Given the high colloidal stability in a biological fluid, facile cellular uptake by endocytosis, and well-known biocompatibility properties of protamine nanostructures, this system simultaneously resolves the two major problems of mRNA introduction and the instability. Protamine nanoparticle is a promising system to fulfill the various needs of treatments and administration routes, which opens the door to various new therapeutic strategies using mRNA.

Creative Biolabs provides comprehensive reagents for mRNA delivery including lipids, surfactant, co-surfactant, and surface modifiers. If you are interested in our products, please feel free to contact us for more detailed information.