Over the decade, research was focused on the discovery of novel therapeutics, and improving the utility of therapeutics that are otherwise limited by suboptimal pharmacokinetic properties like poor absorption, stability, distribution, and elimination. Attempts like chemical modification of drugs or the use of novel drug delivery systems have been proposed to overcome these inconveniences. PEGylation involves modification of the therapeutics by linking one or more polyethylene glycol (PEG) molecules to it. Polyethylene glycol, a polymer of ethylene oxide monomers, being safe and non-toxic, has been approved by FDA for human use. 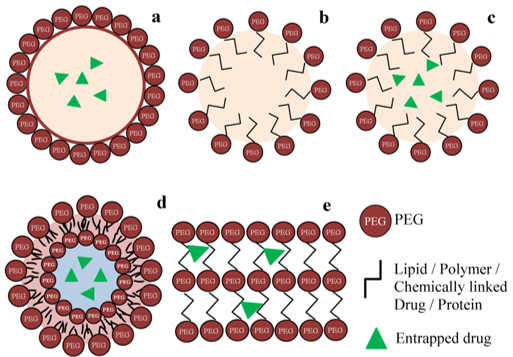 Examples of PEG in Drug Delivery

PEGylation transforms physicochemical properties of parent molecules like molecular weight, size, hydrophilicity, conformation, steric hindrance, and ionic properties which lead to altered elimination kinetics. The increase in the molecular weight of the parent molecule leads to an increase in its size. However, the increase in size is several folds, than that predicted based on the actual molecular weight of PEG due to extensive hydration of polar oxyethylene units of PEG. This increase in molecular size, as opposed to small molecules, helps bypass elimination from the kidney through glomerular filtration. At lower molecular weights (<20 kDa), clearance by the kidney predominates. With a further increase in molecular weight of PEG (20 kDa-50 kDa) renal clearance decreases, while the biliary excretion increases. In the case of greater than 50 kDa, hepatobiliary clearance dominates. Secondly, opsonization, a phenomenon by which serum proteins react with various xenobiotics through Van der Waals' interactions, ionic interaction or hydrophobic interactions depends on their charge and surface properties and consequently eliminates them through RES uptake in the spleen, liver, lungs, etc. PEGylation reduces charge density and provides a steric barrier of PEG chains holding water of hydration that opposes the close approach of serum proteins and cells to their surface resulting in very little clearance by RES.

Fig. 2 (a) Role of PEG on peroral permeation (b) Fate of stealth nanoparticles and non-PEG nanoparticles in blood lumen (c) Release of drug from self-assembled micellar PEG copolymer entrapping drug. (D'Souza A, 2016)

A large proportion of new drug candidates are poorly water-soluble. One successful approach to increase the bioavailability of these drugs is nanosizing. A nanoparticle in a physiological environment will be covered by serum proteins, the so-called protein corona. Some stabilizers, like PVP, pluronic, and PEG, inhibit protein binding, a trait that is believed to result in prolonged circulation time in vivo. PEG is probably the most well-known polymer for this purpose. It is extensively used as a surface modifier of various nanosized drug delivery vehicles, in particular lipid-based ones, creating sterically stabilized particles with prolonged circulation time. Reports have shown that the type of PEGylation, the length of the PEG chain, and the PEG density on the surface affect the surface properties of the particles and the subsequent biological response.

After years of accumulation, Creative Biolabs has developed our own mRNA delivery reagents platform offering comprehensive products. We provide high-quality surface modifiers which including but not limited to:

If you are interested in any one of our products, or you have any questions about your mRNA research, please feel free to contact us for more information.