SEDDS was successfully prepared using P188 as a solidifying agent and thus the need for a liquid surfactant could be avoided or minimized and the lipid content could be increased. When the lipids composed of fatty acid monoester and glycerol or propylene glycol are mixed with P188 or PEG 8000, a solid system is formed without diester and triester, so it shows phase separation. After adding water, the solid system containing P188 began to disperse in water, forming oil beads of 200-600 nm. However, no emulsification of lipids was observed in the solid containing PEG8000, indicating that the surfactant property of P188 was the cause of emulsification. XRD, DSC, and microscopy showed that P188 and PEG8000 maintained crystallinity in the solid system, while lipids were dispersed between the crystalline regions. The drug is still dissolved in the lipid phase. Therefore, a new type of solid SEDDS was developed, in which the drug can be dissolved in liquid lipids, which are then converted to solid mass by the dispersion of the lipid solution into the microstructure of P188. 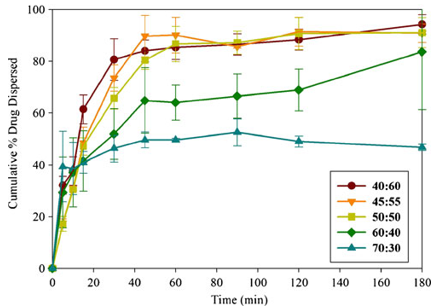 Fig.2 Dispersion of fenofibrate from different ratios of glyceryl caprylocaprate with P188 mixtures using 250 ml of water as dispersion medium at 37oC. (Shah, 2012)

Creative Biolabs is a world-leading biotechnology company. Our expertise is completed by a team of strategic consultants and technical advisors who are among the most renowned experts in their fields. We will work with you as part of your team to provide timely and effective solutions to any challenges that you face in mRNA delivery. Please contact us for more information and a detailed quote.