Solvent injection method is a general and convenient method for drug-loaded lipid nanoparticles (LNPs) preparation originate from the solvent diffusion method. This method is widely used and can combine with the freeze-drying process to prepare dry LNPs or an aqueous LNP dispersion, which has a broad commercial prospect. Creative Biolabs has developed multiple LNP-based drug delivery systems using this approach. Our rich experience and pursuit of details help us to create optimum LNPs production strategies with the lowest price and greatest service to support your research work.

Solvent injection method is similar to the solvent diffusion method. Drug-loaded LNPs gradually precipitate with the dissolving of organic solution into aqueous phase. According to the principle of solvent injection method, the lipid is dissolved solubilized in a semi-polar water-miscible solvent such as methanol, ethanol, acetone, or water-soluble solvent mixture following the drug solubilized in this solvent. With the rapid injection of organic phase into aqueous phase containing the surfactant under constant stirring, LNPs precipitate upon solvent distribution into the continuous aqueous phase. The diameter of particles produced by the solvent injection technique can be controlled in the range of 100-200 nm by adjusting the stirring speed. Although this method is generally used for the preparation of small molecule drugs loaded LNPs, some scientists obtained monodispersed gonadorelin loaded LNPs in water with 421.7nm average diameter, nearly 70% encapsulation efficiency, and up to 12 days continuous release, which greatly expands the application of solvent injection method to preparing LNPs.

Solvent injection can be modified with lyophilization to form a new LNPs preparation method known as "solvent injection lyophilization". In this improved method, lyoprotectants were mixed with the aqueous phase before the injection of drug dissolved organic phase and the following formation of nanoparticles. Subsequent lyophilization yielded dry LNPs which form an aqueous LNP dispersion upon rehydration (Wang, 2012). This method further improved the encapsulation efficiency of LNPs, resulting in uniform particle size and better dispersion. 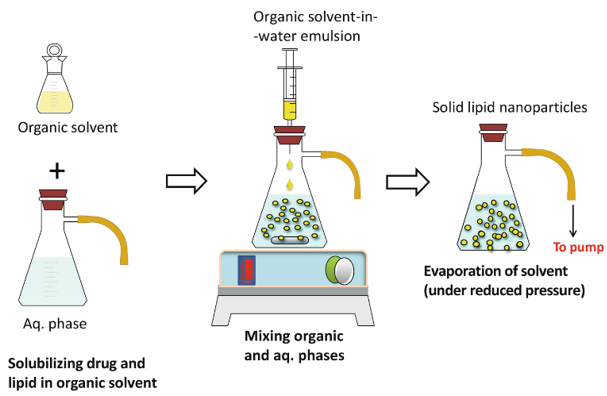 mRNA vaccine is attracting more attention nowadays due to its small side effects, simple production process, and low cost. However, because of its poor stability, it is easy to be degraded by nuclease in tissues and leads to low translation efficiency. LNPs are one of the most appealing and commonly used mRNA delivery tools. Recently, a novel developed LNP-supported mRNA vaccine for COVID-19 has entered phase I clinical trials.

The targeted delivery and release of small molecule or peptides drugs can attenuate the off-target effects and improve the potency of drugs. This strategy is especially valid in the treatment of cancer, leukemia, and other immune diseases. For example, one of the most potent small molecule drugs against Acute Myeloid Leukemia suffers from dose-limiting toxicities. However, encapsulation of this drug in LNPs helps attenuate these toxicities and laid foundation for its clinical use.

Since its inception, solvent injection has immediately become one of the most commonly used methods of LNPs production due to its simple operation and low price, whereat this technology has been widely applied in the delivery of various small molecule drugs and biological macromolecules. If you are interested in our LNPs production services, please feel free to contact us for more details.