Poloxamines are X-shaped amphiphilic block copolymers formed by four arms of poly (ethylene oxide)-poly (propylene oxide) (PEO-PPO) blocks bonded to a central ethylenediamine moiety. These are non-ionic surfactants. Poloxamine 908 (P908) is a highly hydrophilic copolymer that is in wide use as a biomaterial.

PLGA nanoparticles with the average particle size of 150 nm were prepared by interfacial deposition. During preparation, the polar model drug Rose Bengal was successfully inserted into nanoparticles and the surfaces of these particles were subsequently modified with P407 and P908 to form a spatial stable layer of PEG on the surface. Low drug loading (<1%), which can be attributed to the polar nature of the drug and the small size of the nanoparticles. Drug release is bidirectional, with 50% serum release within 30 minutes. After intravenous administration in rats, the drug-loaded nanoparticles largely avoided capture by the liver Kupfer cells compared to free drugs. When nanoparticles were administered, the half-life of Rose Bengal in blood was greatly prolonged, remaining 30% after one hour, while only 8% after five minutes of solution administration. These surface-modified nanoparticles will have the potential to be used as drug carriers to specific parts of the body or to slowly release drugs in circulation. 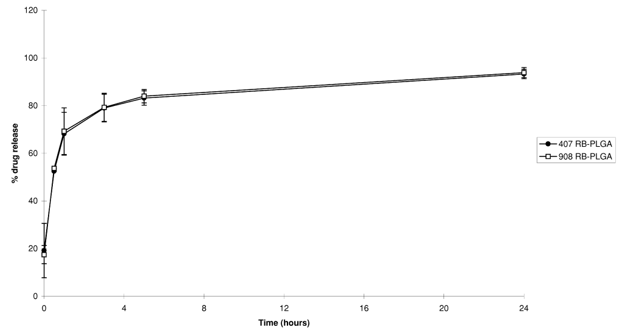 P908 formed thermally reversible gels at a polymer concentration equal to or greater than 25% w/w, showing a useful shear thinning behaviour at 37oC, which makes the formulations easily injectable. The influence of the concentration of P908 on the rheological properties of hydrogels was evaluated and it was shown that the amount of the copolymer affects the micro-rheology, steady-state viscosity, and mechanical properties of the systems. The in vitro drug release studies using rhodamine B and ovalbumin as model compounds showed the potential applications of P908-based hydrogels as systems for the sustained release of hydrophilic molecules and proteins. Moreover, the addition of bio-adhesive polymers or the inclusion of advanced drug delivery systems such as liposomes or polymeric nanoparticles could improve the strength, bioadhesiveness, and residence time of the poloxamine-based hydrogels, and consequently enhance the therapeutic efficacy of the delivered drugs. In conclusion, P908-based hydrogels may represent suitable systems for the in situ application of bioactive as a consequence of their ease of preparation, useful rheological properties, and peculiar versatility. 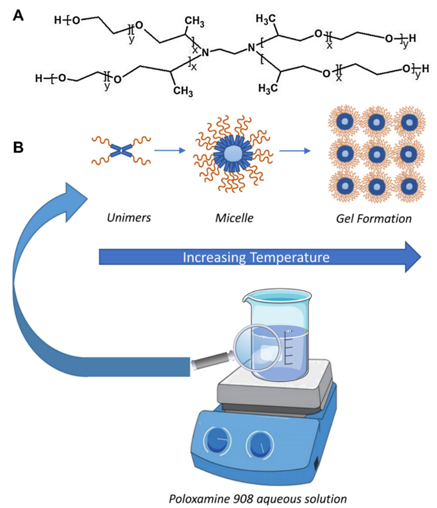 Fig.2 General structure of poloxamines (A) and schematic illustration of gelation mechanism of a P908 aqueous "solution" (B). (Giuliano, 2021)

Creative Biolabs is a world-leading biotechnology company. Our expertise is completed by a team of strategic consultants and technical advisors who are among the most renowned experts in their fields. We will work with you as part of your team to provide timely and effective solutions to any challenges that you face in mRNA delivery. Please contact us for more information and a detailed quote.