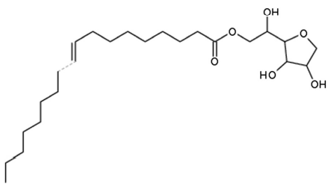 The most important characteristic of drug delivery systems is the drug releases pattern. Vesicular systems have been explored for widely used to reduce the adverse effects. Numerous advantages have been found in niosomes, high specificity, high stability, safety, and economy. Based on the above characteristics, niosomes were used for the sustainable release of drugs. Span 80 can be designed to fabricate noisomes. It is a nonionic surfactant and it is provided with low toxicity.

The vesicle fusion property may be advantageous for efficient drug delivery, and applications of the types of span 80 vesicles described and characterized largely depend on the knowledge of the vesicle's cytotoxicity. Some studies on the cytotoxicity of span 80-based vesicles either as drug carrier 19e or as gene vector 19b are encouraging. Among the different types of the span 80 vesicles investigated, span 80 vesicles type 2 is more attractive.

Moreover, Vesicles can be prepared from surfactants or phospholipids. Some vesicles prepared from nonionic surfactants are innocuous and low in cost. Some previous studies have prepared a highly stable tween 80/PEG 6000/span 80/H2O noisome, which proved to have a good diluted capability. However, with four components, this structure of the niosome is not economical for industrial production. A highly stable niosome composed of only three components is successfully prepared from span 80, PEG 400, and water. The niosome preparation is simple and controllable and the cost of the niosome is low.

Some studies have shown that the span 80-tween 80 mixture-based organogels were successfully developed. The gels were developed by a fluid-filled mechanism. The drug release study indicated diffusion-dependent and expected to be biocompatible. Based on the above advantages, organogels have been considered to be tried as a drug carrier for transdermal bioactive drug delivery.

Microemulsions have been receiving increased attention due to their importance in a variety of technological applications, including enhanced oil recovery, cosmetics, drug delivery. It is known that the microemulsion morphology mainly depends on the oil-to-water ratio and the surfactant type and other additives. Besides, it was found that surfactant type and concentration were the primary factors that controlled the globules' stability, whereas the effects of pH and ionic strength were minor. Some studies have shown that compared with tween 80, span 80 has a better ability to stabilize globules.

Creative Biolabs has been committed to providing the most satisfactory span 80 based RNA delivery services to meet the requirements of our customers. Please contact us for more detailed information.