Creative Biolabs prides itself on being an innovator and problem solver in the mRNA delivery industry. With the cutting-edge facility, knowledge, and technology, we can offer custom solutions in a variety of mRNA delivery. Following are some examples based on transmission electron microscopy (TEM) technology.

In recent years, colloidal dispersions made of solid and liquid lipid mixtures have higher drug loading and controlled release properties than SLNs. It has been suggested that these nanostructured lipid carriers (NLC) consist of drug-soluble oil droplets embedded in a solid lipid matrix. The structures of SLN and NLC prepared from glycerol behenate, and medium-chain triglyceride were characterized by cryo TEM. A drop of the dispersion prepared for TEM measurement was placed on a bare copper grid and plunge frozen in liquid ethane at about 100K. The sample was transferred into a cryo electron microscope operated at 80 kV and 120 kV respectively. The ultrastructure of the dispersions is revealed in electron microscopic studies. The micrograph of NEmu-10% shows only circular dark structures which are attributed to spherical nanodroplets. The SLN dispersion has a completely different electron microscopic appearance: weak circular and ellipsoidal structures represent thin platelets in the top view. The rod- or needle-like particles in the electron micrographs were typical of a thickness of about 10 nm and below. Generally, cryo electron micrographs tend to be strongly biased towards small particles as a result of the preparation technique. As a result, a comparison of particle sizes observed in cryo TEM with the results of particle sizing techniques such as PCS or LD should be performed with great caution. 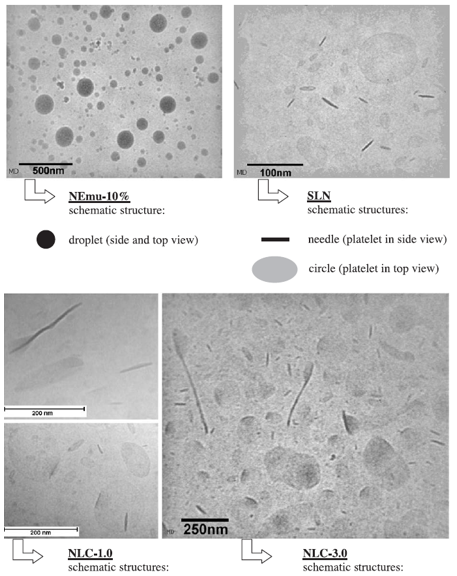 TEM Employed to Investigate the Structure of Gel-Core-SLN

Using thymopentin and insulin as the model protein-drugs, novel Gel-Core-SLN with the hydrogel core and lipid shell were prepared by double emulsion and thermal sensitive gel technology. TEM with the resolution of 0.2 nm was employed to study the structure of the nanoparticle. When TEM technology and the negative staining method were applied, Gel-Core-SLN appeared as a homogeneous particle. In the TEM photos, the new type of nanoparticles were irregular spheres with one or few gel cores while the common particles were uniform regular spheres with little phosphate-tungstic acid distributed on the surface of solid lipid. From Fig. 2B, we can see that phospholipid bilayers distributed in both the surface of gel core and solid lipid nanoparticle, indicating it stabilized both the two interfaces. 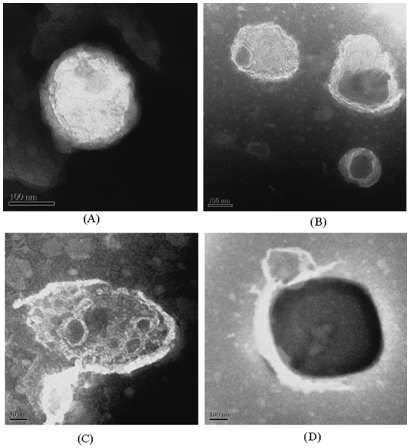 Creative Biolabs is a world-leading biotechnology company. We offer well-established and innovative one-stop-shop mRNA delivery solutions. Our strategic consultants and technical advisors' team are the most renowned experts in their fields. We are flexible to meet the unique needs of mRNA client projects. You can count on our skilled and passionate workforce to find the most suitable solution. Please contact us for more information and a detailed quote.