Fatty acids are carbon chains with a methyl group at one end of the molecule (designated omega, ω) and a carboxyl group at the other end. The carbon atom next to the carboxyl group is called the α carbon, and the subsequent one is the β carbon. The letter n is also often used instead of the Greek ω to indicate the position of the double bond closest to the methyl end.

Fatty acids are poorly soluble in water in their undissociated (acidic) form, whereas they are relatively hydrophilic as potassium or sodium salts. Thus, the actual water solubility, particularly of longer-chain acids, is often very difficult to determine since it is markedly influenced by pH, and because fatty acids have a tendency to associate, leading to the formation of monolayers or micelles.

Fatty acids are easily extracted with nonpolar solvents from solutions or suspensions by lowering the pH to form the uncharged carboxyl group. In contrast, raising the pH increases water solubility through the formation of alkali metal salts, which are familiar as soaps. Soaps have important properties as association colloids and are surface-active agents.

The influence of a fatty acid's structure on its melting point is such that branched chains and cis double bonds will lower the melting point compared with that of equivalent saturated chains. In addition, the melting point of a fatty acid depends on whether the chain is even- or odd-numbered; the latter have higher melting points. Saturated fatty acids are very stable, whereas unsaturated acids are susceptible to oxidation: the more double bonds, the greater the susceptibility. Thus, unsaturated fatty acids should be handled under an atmosphere of inert gas and kept away from oxidants and compounds giving rise to the formation of free radicals. Antioxidants may be very important in the prevention of potentially harmful attacks on acyl chains in vivo.

Polymethacrylates with amine-bearing side chains, polyaspartamides with oligoaminoethylene side chains, and polyacrylic acids amidated with tetramine with alternating ethyl-propyl-ethyl spacers have also been reported to transfect mRNA, potentially by combining efficient endosomal escape at pH < 5.5 as well as optimal polyplex stability. 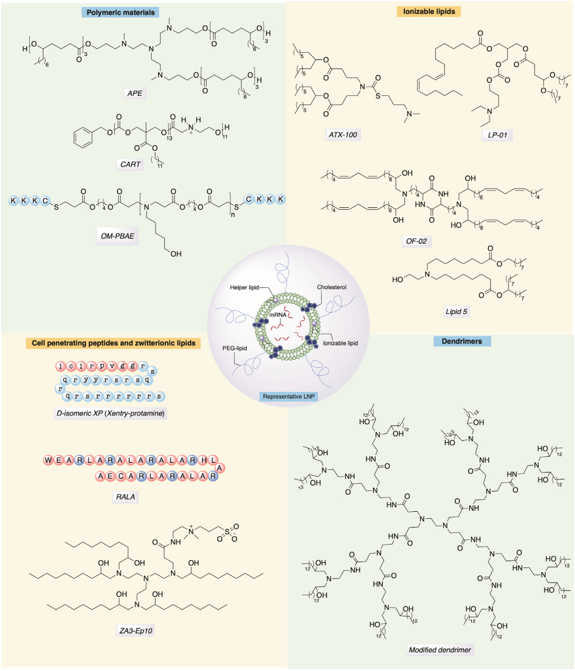 Fatty acids are widely used as inactive ingredients (excipients) in drug preparations, and the use of lipid formulations as the carriers for active substances is growing rapidly. Creative Biolabs is 100% dedicated to the reagents for mRNA delivery. We offer well-established and innovative one-stop-shop solutions for mRNA delivery with fatty acids. Please contact us for more information and a detailed quote.