Cationic lipids are amphiphilic small molecules that are particularly attractive because of their ease of design, synthesis, and characterization. They have become known as one of the most versatile tools for delivering DNA, RNA, and many other therapeutic molecules. Most of them have a common structure of cationic head groups and hydrophobic portions, and there are bonding bonds between the two domains. An ideal cationic lipid for gene delivery should be efficient and non-toxic, which can form highly stable particles with genes, specifically target cells, enhance cellular uptake and endosomal release, and to facilitate nuclear localization of Gene.

The Properties and Structure of Cationic Lipids

A cationic lipid is a positively charged amphiphile. An important property of the amphiphile, concerning its application as a vector, is its geometry. Like any amphiphile, when suspended in an aqueous environment, cationic lipids can adopt various structural phases, including the micellar, lamellar, cubic, and inverted hexagonal phases. For transfection application, cationic lipids are often mixed with so-called helper lipids, like dioleoylphosphatidylethanolamine (DOPE) or cholesterol, both lipids potentially promoting conversion of the lamellar lipoplex phase into a non-lamellar structure, which presumably rationalizes their ability to often improve cationic lipid-mediated transfection efficiency.

Their structures are broadly classified into three parts, including positive-charged polar head, linker bond, and hydrophobic tail. The positively charged head group exhibits one or more positive charges which trigger the interaction with negatively charged phosphate group in nucleic acids through electrostatic attractions leading to the formation of complexes containing condensed nucleic acids. 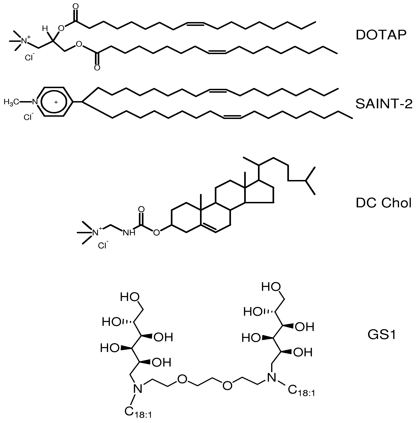 The first step in the preparation of vector/DNA aggregates suitable for gene transfer is the condensation of the large DNA molecules, which is driven by electrostatic interaction between the cationic lipid and the polyanionic DNA. Spontaneous self-assembly into nanometric particles termed lipoplexes results, leading to shielding of the DNA from the nucleases of the extracellular medium. As a result of non-specific endocytosis, the lipoplex is encapsulated in intracellular vesicles, though fusion-based cellular uptake cannot be excluded. The DNA must then avoid degradation in the late endosome/lysosome compartment by escaping from the (early) endosome into the cytoplasm. Trafficking of the DNA through the cytoplasm precedes uptake by the nucleus of the target cell, and subsequent transgene expression therein. In the nucleus, the DNA appears to be separated from its vector, and microinjection experiments have suggested that gene expression does not occur if the DNA remains condensed in intact lipoplexes. 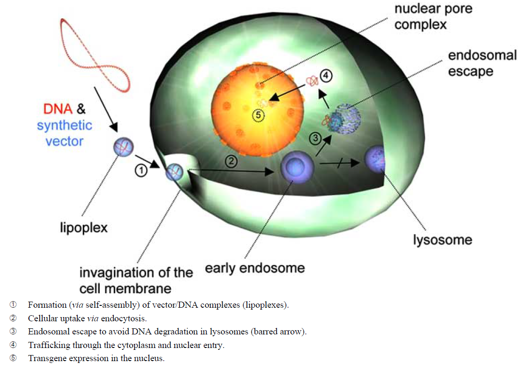 Fig.2 A representation of the various steps involved in gene transfection by cationic lipids. (Martin, 2005)

Creative Biolabs offers well-established and innovative one-stop-shop mRNA products and solutions. You can count on our skilled and passionate workforce to find the most suitable path and to guide you through your research journey. We can make your mRNA delivery journey easier. Please contact us for more information and a detailed quote.